We invite you to read the interview with Rashaad Ernesto Green, the director of „Gun Hill Road”, which was premiered at this year’s Sundance Festival.

After three years in prison, macho Enrique (Esai Morales) returns home to the Bronx and finds things changed. His wife, Angela (Judy Reyes), is distant, and his teenage son, Michael, has come out as Vanessa, a transgender woman. Unable to accept his child for who she is now, Enrique clings to his masculine ideals while Angela attempts to hold the family together by fiercely protecting Vanessa. Still under the watchful eye of his parole officer, Enrique must become the father he needs to be or, once again, risk losing his family and freedom.[sundance.org]

GUN HILL ROAD is your debut feature, but you’ve already did few shorts. Could you tell few words about them? Are there any particular, common subjects you bring up in every one of them?

PREMATURE explores the decisions and actions of a 14 year old girl in the Bronx after she finds out she’s pregnant. CHOICES explores the thought process of a young man as he makes love to his girlfriend, and how his upbringing has effected him. CUTS is about a teenage boy who must prove his manhood to his father by pursuing a girl from school. One of my professors at NYU pointed out to me that the theme that continues to appear in my work are „children in crisis”.

The story of GUN HILL ROAD takes place on Bronx, you’re Bronx native… I wonder if the movie based – at least partially – on your own life experiences?

Although the story of GUN HILL ROAD is not a direct retelling of my own life, it was inspired, in part, by family who comes from the Bronx. A family member of mine experienced a similar situation to the father „Enrique” in the story. 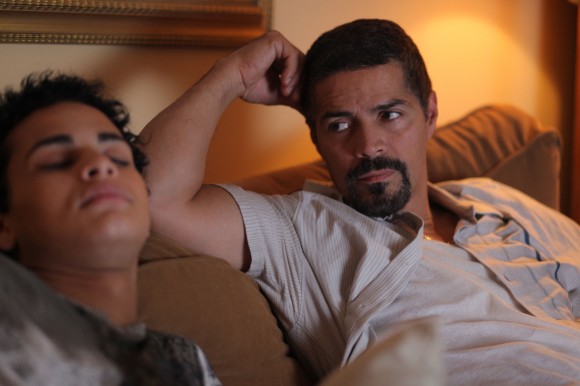 Why did you chose exactly this location (Gun Hill Road) for your movie?

We chose Gun Hill Road because my family is from the area, and the north section of the Bronx is rarely depicted in films.

We don’t know much yet about GUN HILL ROAD, but from a glimpses of informations found here and there I can see an image of a movie inspired – at least to a certain degree – by Spike Lee or Larry Clark. Are such associations relevant? Were you inspired by their works during making a movie?

Spike Lee has always been a major influence for me. I grew up watching his films. He is my professor at NYU and a mentor to me. I have also been inspired by Larry Clark’s KIDS, Peter Sollet’s RAISING VICTOR VARGAS, and Seith Mann’s short film, FIVE DEEP BREATHS.

Are you interested in genre cinema? Would you like to make one day a horror or sci-fi or you’ll rather stay with real life stories about real people?

At this point, I’m very attracted to real life stories about real people, but that doesn’t mean that one day I won’t branch out. Ultimately, I would like to able to tell stories that reveal the humanity of its characters in all genres.

Any plans for the nearest future?

We premiered GUN HILL ROAD at Sundance this year, where it was sold and awaits distribution. I’m excited to tour international festivals with the film, and release GUN HILL ROAD in the USA this spring.