Interview with Michael J. Bassett, the director of „Solomon Kane” 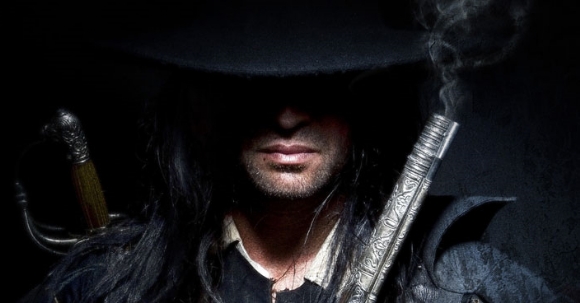 We invite you to read an interview with „Solomon Kane” director, Michael J. Bassett. In the first sentence of this interview Michael says that there aren’t many good mature fantasy films lately. That is true indeed, so we always welcome such productions with open arms, here at the Opium Inn. And I have a strange feeling that „Solomon Kane” is definitely worth waiting for. Enjoy.

What is so tempting in Solomon Kane character that you’ve decided to make your third feature about him?

More than anything it’s because I love fantasy and don’t feel that there are many really good fantasy films being made these days – at least not more adult and mature kinds of films.
But also, they say that a writer’s central character is always some shadowy wish – fulfilment version of him or herself.  In my case with Solomon there are elements of him that I admire – his strength and fortitude as well as his physical prowess. (I also wish I was as good looking as James Purefoy but life is cruel.)  I sympathise with his search for purpose and meaning in a world of evil and corruption as I think that’s still a universal challenge for many people.  He’s a little more serious and solemn than I am though.
One of the things I seem to bring to my films – now that I’ve made 3, I guess I can start looking for unifying ideas – is that they’re all pretty physical and set in a ‘real’ feeling world of wind, rain, textures and atmosphere.  I love nature and the outdoors, so the physical challenges of making a film in those conditions is something I like a lot and SOLOMON KANE was a chance to make a fantasy-adventure movie in that kind of ‘real’ world.  Also, putting actors into a version of a reality where they can genuinely exist and experience the world I’m trying to create, I think, gets better performances.  I can’t imagine how boring it must be to shoot a film entirely against a blue screen in a studio. It’s almost impossible for an actor to do good work and for the director it becomes about little more than the post production visual effects.  Where’s the fun in that?

Is the script based directly on any particular Robert E. Howard story or did you just use his works as a starting point and created your own Solomon Kane story?

This is an entirely original story by me, not based on any of REH’s stories.  The idea with this film and story was to try and create an origin for Kane so that a wider audience who aren’t so familiar with Kane can learn about him and enjoy any sequels which would be more closely based on the original stories.  Of course, the danger with that is that I am taking a big liberty with the character by creating an origin that Howard himself never did.  But the feel of the story is very Howard and by the end of the film my Solomon Kane is very much the man we know from the stories.  It’s a tricky balance to honour the character who I am such a fan of and also to make sure the film is accessible to other people too. 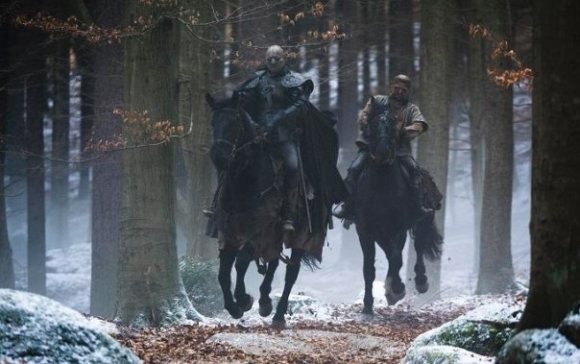 For me James Purefoy seems to be the perfect choice for the main role. Was he considered as Solomon Kane since the very beginning of the project or did you have any other options earlier?

I had known James Purefoy a little before making Kane with him and his name was mentioned for Kane at the very start of the casting process but I was the one who thought he wasn’t right.  To me James felt like that very modern kind of actor –the kind of guy you see in a smart suit, a beautiful girl on his arm and a sophisticated drink in his hand.  Of course, when I saw him in 'Rome’ I realized he had so much more range than I had originally thought.
Then I agreed to meet with James to just talk about the character and the script that I had sent him.  I showed him the artwork and storyboards I had done and it was clear that he was very excited about the project.  And the more I talked to him the more I realized that he was perfect for the role.  We clearly agreed on so much about the character and how he could be brought to life.  James told me that’s his 12 year old son had read the script and told him that he had to get the part.  So really, it was perfect and I believe James has given the best performance of his life and helped make Solomon Kane into so much more than just a simple fantasy film.

I’d like to ask you about violence in „Solomon Kane”. In my opinion such movies require a consistent approach and some things or scenes should be presented in a very straight way. No blurring, no fading out… How does it look like in „Solomon Kane”?

One of the things I was very keen to achieve with Solomon Kane was to have a reality and brutality to the violence.  I love sword fighting – Highlander is one of my favourite movies and when I was a kid –and really looked forward to the opportunity to do some great combat.  But it was really important to me to make the fights seem very real.  I even went to the trouble of getting a dead pig on the set and having my sword master slash, stab and cut the body so we could see what a real sword did to flesh.  Let me tell you it is pretty surprising how much damage the sword can do but also equally surprising things it can’t do.  I made a video of us doing it and I’m going to proceed, bonus features for the DVD.
The whole of Solomon Kane was shot in a very classic, straightforward way and this is also reflected in the fight sequences.  There is no trickery or wire work – just practical, well choreographed, brutal and intense swordplay. 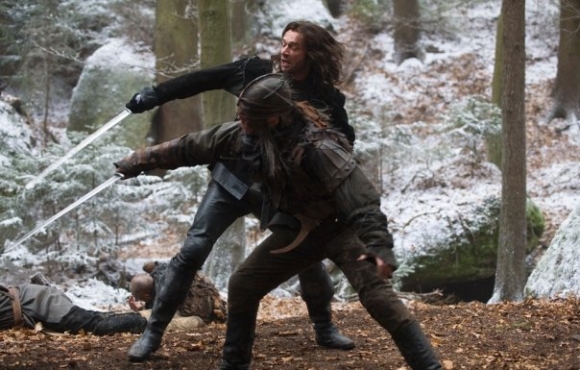 I have to tell you that „Deathwatch” is one of my favourite horrors ever. What do you think about this movie after 7 years? Would you change anything?

I’m glad you liked Deathwatch.  I haven’t seen it for a long time as all I see now are missed opportunities and the evidence of a very inexperienced film maker at work.  It has so many good ideas and so much potential – I know I should have fought harder and worked more to get what I wanted on the screen.  I still love the atmosphere and overall vibe of the film and I love much of what the actors did but I feel the pace isn’t what it should be (lots of interference in the edit, as I recall) and I’d love to take another run at the cut just for my own pleasure.  I know I could have made it much more frightening and generally more intense with just a few more shots here and there.  I don’t think it’s a bad film at all and I’m very proud of it – I just wonder what it could have been.  Ah well, no point in dwelling.  I would love to make another atmospheric war time set horror film though.

I’ve read somewhere that you were one of the candidates for directing „Predators” (finally Nimrod Antal was chosen). Is it true or is it just a rumour? How do you like all these new movies with cult sci-fi characters like both AVP or „Terminator: Salvation„?

Yes, I did meet with Robert Rodriguez and talk with the execs at 20th Century Fox. It came about because Harry Knowles had seen SK and really liked it a lot.  He recommended that Robert Rodriguez took a look at it with a view to considering me for Predators.  Of course, this was enormously flattering but I never really thought I had much of a chance.  But the execs at Fox and Robert looked at my other too and really liked the intensity and aggression in Wilderness, so I flew to the USA for meetings and to talk about it. Ultimately Nimrod Antal got the job. Of course I was disappointed but that’s how it goes. He obviously talked a better talk than I did or had some really interesting vision for it that I didn’t or maybe he just hit it off with Robert. I’ll never know. But I can’t wait to see what they come up with.
As for the remakes and re-use of classic sci-fi characters… I have no problem at all with them. I want more. But I want them to be good and made for the right reasons and not just to exploit an existing brand.  I was disappointed with Terminator because there was a fantastic idea in the middle of it all which was let down by a confusing and unfocused story.  I’m very nervous about Ridley Scott going back to Alien because, although he is my film making hero and Alien is the reason I became a film maker, I wonder if they really have anything new to add and I absolutely HATE the idea of a prequel.  In fact, that’s one of the things that is pissing me off these days – prequels.  They are narrative and dramatic dead ends and need so many silly loops and illogical ideas to make the stories work that the films seem to be nothing more than empty spectacle. 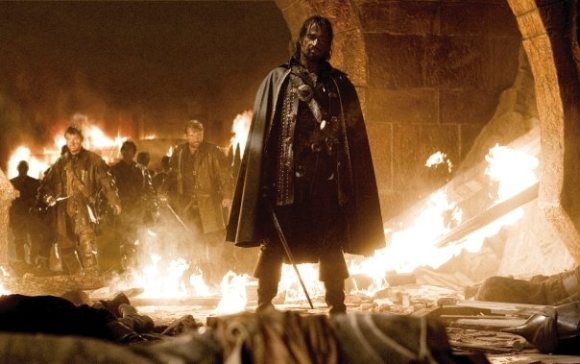 Have you already got an idea for your next feature movie?

I’ve always got loads of ideas for new movies but I haven’t really decided what I want to do next. I recently did a re-write on a script about The Devil’s hit man for the producer of Solomon Kane and I absolutely love how it’s turned out but it’s a pretty expensive action movie, so that’s going to take a while to come together.  I’ve also got a small scale psychological thriller which I’m very keen to make as well as a few more straight forward horror ideas that would be fun. The problem is raising finance for them in a world where it is harder and harder to finance movies. It’s been a while since I shot Kane now so I’m feeling it’s about time to get back behind the camera.

Which movies made the greatest impression on you so far in 2009? Is there any feature you’re particularily waiting for this year?

There’s been really nothing this year which has made me feel very passionate – I’ve enjoyed plenty – but the film I’m most looking forward to is James Cameron’s AVATAR.  I haven’t loved the trailers but he is such a brilliant film maker that I have faith he will deliver something that utterly blows all us geeks away.

Thank you for this interview. Michael.