Spineless Earth – interview with James McAleer, the director of „Invertebrate”

INVERTEBRATE is quite an extraordinary project. Imagine that there are plenty of actors starring there, but none of them can talk. I’d even say more, none of them have a spine! Set in postapocalyptic world, INVERTEBRATE is a story about… insects. And no, it won’t be a documentary, but a full-blooded drama. We decided to contact the head of this whole bug enterprise, James McAleer and ask few questions about the movie. And here’s the result of our conversation.

First of all, could you present your previous movie activities to our readers?

Sure. Chances are that none of your readers will have ever heard of me before, as I tend to work pretty much behind the scenes as a Director of Photography, although I have previously directed commercials, music videos and the occasional short. I also produced and shot Neil Ilderton’s „Touch of Red” which premiered last year at the 53rd BFI London Film Festival. (found here )

Why insects? What is so tempting in all these flying or crawling creatures that you decided to make a movie about them?

Insects are everywhere, as co-habitants of this planet, they outnumber us vastly and yet we are only just beginning to understand them.  They operate incredibly complex social systems, and as a species they are very successful at growth and survival.  They live in a universe under our feet that we barely even notice.  They look so alien to us, and simply watching them move and interact with one another seems alien.  I wanted to capture this, and show the audience just WHO we are sharing this world with.

The last thing this movie is, is a nature documentary.  I have taken great liberties in filming this piece, manipulating the footage through editing to describe dialogues and drama that simply aren’t there. I have pieced together a dramatic narrative through hundreds of bits and pieces of footage, that describe an anthropomorphic society, that we can recognise.

Can we call INVERTEBRATE „postapocalyptic” movie? Because as I understand it’s about about the Earth in times when people are long time gone? Will there be any explanation what happened to human race? Personally I don’t think it’s necessary…

It is probably the easiest sub-genre to pigeon-hole the film, although the post-apocalyptic nature of it’s setting isn’t important to the narrative.  All the audience needs to know is that we aren’t there anymore, and that the insects are at the top of the food chain now.  These creatures are making use of our structures and cities, but aren’t interested in their function, it’s simply another habitat for them, which is slowly rotting away.

Their society is operating on a base level-  in crude terms it’s about eating, fighting and fucking.  Intellectual pursuits aren’t of any interest here – and it is a brutal but successful model. It’s why they have survived. One tragedy leads to another’s victory.

I like the idea that this ambiguity will lead to questions from the audience, that I won’t answer.  I think it’s important to leave this questions unanswered, and that it can lead to a richer imagining of the circumstances from the audience than I could ever provide. No-one wants to be spoon-fed the plot of a movie – it takes away all the magic.  And hey, if people leave the theatre, go to a pub or cafe and talk about it, that can only be a good thing! 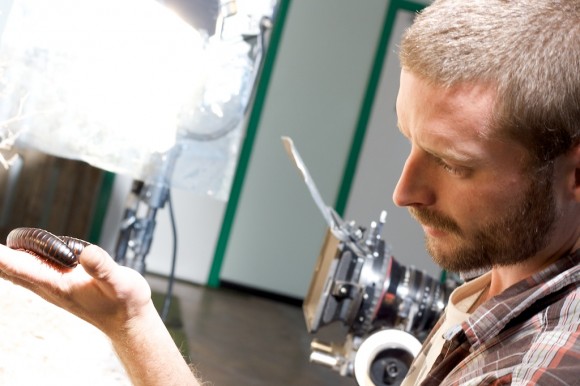 One of the most important technical aspects of INVERTEBRATE is the fact that you don’t use CGI at all. Could you tell something more about all this technical stuff? Did you…. eee… work with the insects all the time? Did you use any animatronics? What was the greatest challenge for you during production of the movie?

Sure, one of the first reasons I decide to try and make this film, was that I was tired of all the easy CGI use in modern, and especially modern genre movies.  (I know that good CGI is actually incredibly hard to pull off, and I’m not trying to take anything away from the talented practitioners of the art) Maybe I’m just getting old, and nostalgic about creature features, but I felt there was a certain realness is the magic of those movies, where all of the effects were practical or photographic. (even when we know they are fake!)

As a cinematographer, it was like a pet project for me to try and recreate these techniques, and bring some magic back, without relying on CGI to create the effects. I hope that I’ve managed to suspend your disbelief for long enough for the audience to enjoy the movie.  Fact is, I’ve always wanted to shoot a movie with miniatures, and so far hadn’t had the chance!

So to answer your question – yes. I worked with real insects the whole time.  Pete Young spent six months building this incredible set, and I filled it with Bugs.  Working with Guy Tansley, our 'Bug Man’ I knew how the insects would interact on a base level with one another, and I tried to film those interactions within the context of the story I was trying to tell.  Sometimes we would wait days to get 12 frames of useable footage, but it was always worth it.

I read once about a scientific theory that fleas are the species which would adapt in the best way to post-nuclear environment. Do you agree with this theory? What’s the source of their power? Why insects and not „the strongest nor the most intelligent species” would survive?

I haven’t heard that theory before, but it doesn’t surprise me! I suppose one of the things that makes these creatures so attractive in movies, is that they are so robust, in a darwinian fashion… They are perfectly adapted within their societies to prosper. I think that’s why the creatures in Ridley Scott’s 'Alien’ are so frightening to us- that they are so alien to us yet so familiar. They are not concerned with anything but the survival of their species.  I think that our end – if it does come – will be the result of our own greed, stupidity, or selfishness. Insects don’t possess these traits.

When I was a kid, SWARM was a real shock for me. But today I think my favourite „bug” flick is this fantastic oldie, THEM!. I wonder what are your favourite movies with insects in main roles?

Ha Ha! I love those movies too! When I was researching this film, I watched and re-watched many of the classics of the genre, and I have to say the most inspirational of these were Saul Bass’s 'Phase IV’, for the wonderful photography and description of the insect mind, and the beautiful 'Microcosmos’ by Claude Nuridsany and Marie Perennou, a documentary/drama crossover, that they had managed to 'discover’ this society in their back yard.

Can you tell us few words about the distribution of the movie? Movie festivals? DVD?

The film was originally commissioned by the UK Film Council and Northern Film & Media as an experimental short film, and the result of this commission will be released first, as per contract.  This short film is due to be released in December 2010, and will follow festival releases first, before being made available for download early next year.  If we can, we will release this version free of charge, possibly attached to the soundtrack by 'Beats for Beginners’ available on iTunes.

The feature version is underway – I have filmed the main core of the film.  there are further elements still to be shot, and hopefully this will all be ready by summer next year.  We are in early talks with distributors to make a theatrical release possible.

Do you already have any post-INVERTEBRATE plans?

The first plan is to take some time out with my wife and kids! but next up after this is to develop a few feature projects, and see what goes… I’m developing a horror feature with Neil Ilderton called 'Spring to Fall’ and writing a sci-fi feature. In the meantime, I’ll continue shooting commercials, and hope some more juicy film projects come my way!

Thanks for the interview, James.

Thanks for reading, and I hope you enjoy the film. 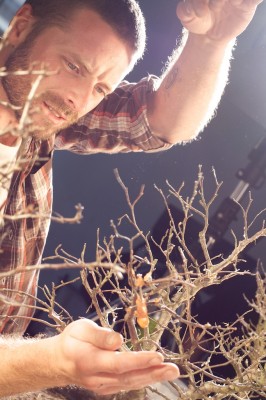