After a hellish Australian heat, now it’s the time for total change of aura – „On The Ice ” is set in frozen landscapes of Alaska, within the community of Inuites, indigenous people living in that region. A foretaste of ON THE ICE atmosphere (literally and figuratively) you could already see on our website in short movie SIKUMI – ON THE ICE is like a present, expanded variation on that short length feature. Here is an interview with the director of both films, Andrew Okpeaha Maclean.

In the isolated, frozen town of Barrow, Alaska, Iñupiaq teenagers Qalli and Aivaaq have grown up like brothers in a tight-knit community defined as much by ancient traditions as by hip-hop and snowmobiles. Early one morning, on a seal hunt with their friend James, a tussle turns violent, and James is killed. Panic stricken, terrified, and with no one to blame but themselves, Qalli and Aivaaq lie and declare the death a tragic accident. As Barrow roils with grief and his protective father becomes suspicious, Qalli stumbles through guilt-filled days, wrestling with his part in the death. For the first time in his life, he’s treading alone on existential ice.[sundance.org]

Your short SIKUMI won jury prize on Sundance Festival in 2008. Did that prize change anything in your life as a filmmaker? Perhaps it helped you to attract the attention of potential sponsors?

The jury prize from Sundance in ’08 definitely changed my life as a filmmaker.  I got an agent, I was nominated for, and won other awards, like the United States Artists Rasmuson fellowship, and it certainly helped in raising money for the feature.   I also applied for and got into the Sundance lab program the next year, which was a huge help as well.  The Sundance institute goes to great lengths to support the filmmakers they work with.  They help some financially, and artistically, but the biggest help is probably just the advice they are able to give.  Making your first feature film is a big, complicated often confusing process.  It’s great to be able to turn to a group of smart, experienced people who have no agenda other than helping you make the film you want to make.

I think that the actors did a great job in SIKUMI. They were absolutely natural and convincing. Why didn’t you work with them again on ON THE ICE?

That was a tough choice.  First I should say I’m not sure the actors from SIKUMI wanted to star in the feature.  They all have regular jobs and families and I don’t think any of them are looking for a career as professional actors.  But I also wanted to make a different film.  I think of SIKUMI as a complete film in and of itself.  It’s not an abbreviated version of a feature.  I didn’t want to just take the short and make it longer.  I decided to set the feature in contemporary Alaska, so the characters ride snowmobiles instead of dog sleds.  (It’s hard to tell, but SIKUMI was actually set about 50 years ago, just before dog teams got replaced.)  I was also interested in exploring the lives of teenagers in the arctic.  Teens or young adults in the arctic are going through some very interesting times.  They are drawing their identities both from traditions that stretch back thousands of years and from a contemporary culture that reinvents itself constantly.  I got interested in that dynamic and drew from it to write the feature.

I have an impression that in SIKUMI the landscape and the Nature itself was as important for you as the story and characters, wasn’t it? Quiet, majestic, showing how small we are. I assume that ON THE ICE is strongly connected with Nature as well?

I think that a sense of place is very important to the film.  SIKUMI all took place on one location, on the frozen ocean.  ON THE ICE takes place both on the frozen ocean, but in the village as well. SIKUMI was an exploration of morality between two people.  The frozen landscape was like a blank slate, wide open, where anything is possible.  Disposing of the body would have been easy, except for the morality that the characters carry with them.  ON THE ICE follows its characters back into town after they have dumped the body into the ocean.  The lie that they take back with them from the ice alienates them from everything and everyone they know and love.  What seemed possible, even easy on the ice becomes monumentally difficult to contain back in the village.  The vastness of the ice is replaced with the claustrophobic closeness of town.  The anonymity of the empty landscape is exchanged for the familiarity of a tiny community where everyone knows everyone else. 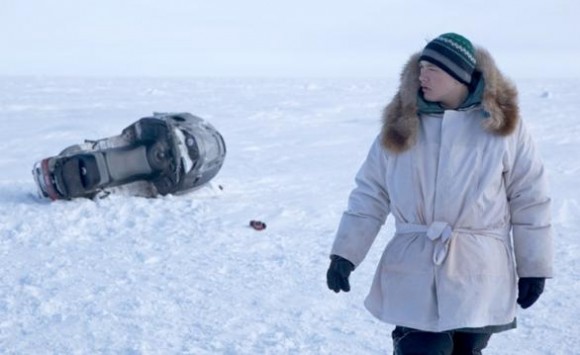 I know that both SIKUMI and ON THE ICE were made in extreme weather conditions. What was the greatest problem you had to challenge during shooting the feature?

The most challenging aspect of shooting was getting to the open lead.  The lead is the edge of the ice-floe, where ice meets water.  We were supposed to shoot several of the most pivotal scenes at the lead.  However, the location of the lead is constantly changing.  It’s dependent on the winds and the ocean currents.  One day the lead might be two miles from shore, the next day it might be twenty.  It can be a dangerous place to shoot.  If you are caught on the wrong side of a crack when the wind shifts the entire film crew might drift out to sea.  We hoped to shoot the scenes at the lead on the first few days of filmming, but we weren’t able to get there until the shoot was almost over.  I had to re-write several scenes to take place at an alternate location.  In the end it worked out and we got what we needed, but it was close.

The story takes place in Barrow. I’d like to ask you what makes Barrow and people living there so special that you’re making movies about them? Apart from the fact that you live there and know the place better than any other filmmaker in the world.

I’d say that the primary reason I make movies set in Barrow is because I am from there.  It’s an old cliche that you write what you know, but it’s true.  Barrow is a unique place.  The isolation combined with the harsh environment have fostered a strong sense of community.  It is also a very dynamic place.  The culture has changed incredibly rapidly over the past hundred or so years.  My great-grandfather hunted for food with weapons made of stone, and I am a filmmaker.  That’s a pretty huge discrepancy of experience.  And yet there are many things that haven’t changed, that tie my experience to his.  I think that is amazing.

What would you like to tell the audience with your movie? Does it have any particular message or would you like just to entertain people or tell them about your homeland?

I’d mostly like the audience to be entertained.  I want to make more films, so I hope this one is successful.  I’d like them to connect with the characters.  I want them to go on the same emotional journey that the characters do.  And I’d also like give the audience an experience that they couldn’t have otherwise had.  I’d like the film to take them to a place and a culture that is new to them.  It’s a combination of the familiar and the strange that I hope the audience will connect with.

Any ideas for another feature? Maybe you’ll make a movie on Hawaii for a change?

I’m not sure right now.  I have a few ideas.  I’ll probably make a film set outside Alaska, because I don’t want to get pidgeon-holed as just an ‘Alaskan filmmaker’ or ‘native filmmaker’.  Most of my ideas are centered in the American Southwest.  So I’ll probably trade a landscape of frozen water for one of burning hot sands.