DoppelLuster – interview with Adam Mason, the director of „Luster”

We invite you to read this a bit old, but still interesting interview with Adam Mason, the director of upcoming dark comedy called „Luster”. (Trailer here)

Another movie and again Andrew Howard in the main role. It seems you just love to work with each other. Why him? Did you at least for a minute consider somebody else for a role of Thomas Luster?

I’ve known Andrew for years now. I’m an only child and he’s my older brother as far as I’m concerned. He just had a beautiful daughter whose my God child. We’ve got a lot in common as people, we like the same stuff. Find the same things funny. So we find it easy to relate to one another.

A lot of actors are really unpleasant people to work with, neurotic and narcissistic — a very bizarre mix of insecure and arrogant at the same time, constantly want you to hold your hand throughout the whole process. When you’re making a film, you get asked a million questions a day and are expected to have answers for everything. That’s kind of a directors job.

So for me, if I can hire people who are brilliant at what they do, can do it better than I ever could, and understand my sensibilities — then not only am I going to get what I want, I’m going to have a lot more fun getting it.

Andrew never really asks me questions, he has a much better idea of acting than I ever could and he’s absolutely brilliant at what he does. We’ll talk about the character and stuff beforehand, but once we’re on the same page, I pretty much hand it over to him. I think it’s an actors job to have an oversight of the entire character from start to finish. Often they get it totally wrong, and then there’s a lot of work to be done directing them.

Consequently I keep using him. That’s the main reason I use a lot of the same people over and over. I like to use people who deliver every time. It removes the need to waste time talking about unnecessary bullshit on set, when time is always the most valuable asset. You wouldn’t believe the amount of actors who turn up to shoot having done zero prep. So many times over the year I’ve had the slow realization that the actor in front of me doesn’t even know their lines. If they haven’t even bothered to do that, you know immediately they have put no thought into the scene, or where it stands within the context of the script as a whole. Those people are to be avoided.

I’ve been very lucky on Luster and Blood River. The acting was exceptional across the board.

Simon and I wrote Luster for Andrew. So we never considered anyone else. The same with all the main parts in that movie – they were all written for the particular actors. There was no casting process.

Personally I gotta tell you that I feel bored with all those schizophrenia/double personality/blahblah post-„Fight Club” or „The Machinist” movies. Which element will distinguish „Luster” from these films? Or maybe I’m wrong and it will be something totally different film?

Well – those films are both very portentous, serious affairs. Luster is a dark comedy and isn’t meant to be taken that seriously.

I’ve always thought that there are two people buried inside each of us — the one we show to other people, who is essentially made up, and the real us, who is much darker, insecure and more dangerous.

It’s hardly the most original idea in the world afterall. Robert Louis Stevenson was writing about it 130 years ago. But I’ve always found duality amusing, and this film is a literal interpretation of those two sides.

I think that every another Adam Mason movie is darker, more oppressive and mindtwisting than the previous one. Can I expect crossing another boundaries in „Luster”? What kind of emotions, feelings or reactions of audience would you like to cause with „Luster”?

Like I said – Luster is very dark in some parts, but overall you might be let down if you’re expecting a horror movie, because it’s very far from that. 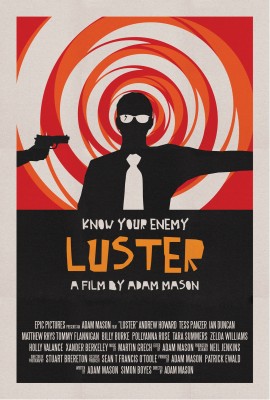 I know „Luster” didn’t even have its premiere yet, but do you already have an idea for another feature?

Well – we shot and completed Pig way after Luster, so I’ve already made another movie.

I’ve got a few things on the go at the moment. Most likely to happen is Dracu.L.A – another movie with Andrew which I’m very excited about.

Then Simon and I have a script called Blind which we’re going to do with Tess, which is the most I’ve ever been happy with a script I’ve written.

Andrew and I also have a one shot western in the style of Pig called Death Valley, which we really want to get going.

But its so hard at the moment. Financing has dropped out of the industry in the past few years, and the dying DVD market is crippling all of us low budget movie makers.

I’d like to ask you about „Pig”. Do you treat it more like an experiment, movie made for fun, an exercise or something else? Do you plan to release it on DVD?

Pig was made as a reaction to the terrible experience we had had when it came to the distribution of Blood River. Its heart wrenching when you put everything you have into something only then to see it destroyed in front of you.

So Andrew and I channeled all that anger and frustration and made Pig. It certainly wasn’t made for 'fun’. In fact, it was one of the furthest experiences from 'fun’ I’ve ever had.

Everyone involved had to go to an incredibly dark place to make it and it ended up being very destructive. Friendships were destroyed. Boundaries were stepped over, and ultimately it caused a lot of drama in many of our lives. It certainly made me really question why I do all this stuff in the first place.

Afterwards, Andrew and I spent a long time deciding we were going to throw it away and never show it to anyone. It literally had that level of impact on us.

But time went by and we had another look at it, and realized that it kind of stood alone and we were proud of it. It’s hard to feel too responsible for something that was completely improvised. I think that was what scared us all so much — when you do something like that, it takes on a peculiar life of its own. The massive, totally improvised takes gave everything an awful feeling of reality, that took a long, long time to shake off afterwards…

At the moment we are giving away the film for free on the internet. Us deciding to do this is a direct reaction to our previous work being held up in a nightmare of corporate bullshit.

If anyone wants a copy they can email me at adammasonisdead@hotmail.com or facebook me. I’m not hard to track down.

Have you seen any good movies lately? What could you recommend to our readers (except your own works of course)

The films I’ve liked most this year have been Greenberg, The Good Heart, Unthinkable, Hunger…

And the last question. Can you imagine yourself doin’ romantic comedy? For example with Andrew Howard as a clumsy accountant who meets love of his life in a mall while buying cornflakes?

Thank you for the interview!