Under the wings of the cyberdragon – Interview with Jeffrey Travis, the director of DRAGON DAY 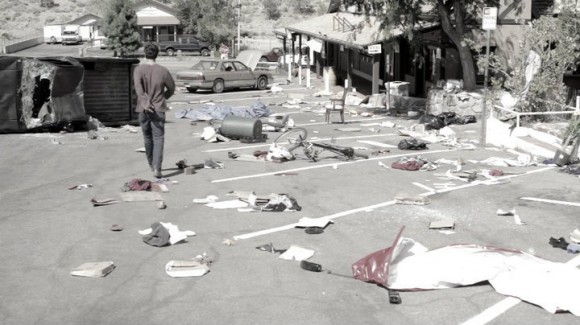 What would happen if the Chinese decided to make a lot of trouble on Uncle Sam’s playground? We invite you to read the interview with Jeffrey Travis, director of DRAGON DAY.

When out-of-work and disgraced former NSA analyst Duke Evans and his estranged wife and daughter move into a newly inherited mountain cabin, he must fight to save his family after China takes over the country through a nightmarish cyberattack that devastates the entire United States.

What was your premise while creating the script for DRAGON DAY – was it more of a technophobic approach, or kind of a political-fiction one?

The premise for the DRAGON DAY script started with more of a political and sociological fiction idea. What if the U.S. suddenly became a third world country with military-police state in charge? We take so much for granted. Food is always stocked in grocery stores. Clean water from our faucets. Cash is available at any ATM. Cell phones and transportation are reliable, abundant, and dependable. The police are here to protect you, not harm you. The amount of debt we have taken on is manageable and not a problem. What if all this changed in a flash? How would we react? What kind of people would we prove ourselves to be under these circumstances? It’s unthinkable for most Americans, but I grew up in Argentina during part of the military dictatorship of the 70s and 80s.

The technophobic aspect came later. I’m an electrical engineer by trade, so I thought about how to incorporate a modern cyber-Pearl Harbor attack into the story. And that’s when my co-writer Matt Patterson and I worked in the idea of a secret virus planted inside every microchip „Made in China”.

I wonder if all this „cyber-apocalypse” you’re talking about in DRAGON DAY finds its reflection in your own feelings and concerns? Do you think something like that could really happen?

You know, I don’t think if it could EXACTLY happen like in my movie— there is a great deal of fiction, assumptions, and suspension of belief that has to happen to tell this as a thrilling story.

However I do believe we are far more vulnerable to widespread panic and damage through a cyber-attack than we care to think about. For all the security measures taken in our post 9/11 world, it seems we are deeply vulnerable in our infrastructure and networked systems. It’s been well documented that cyber attack attempts have already occur on the electrical grid, the Pentagon, the banking system. In addition, our incredible amount of debt has made the U.S. economically vulnerable.

So, yes, it does reflect a real fear and concern of mine. In America we keep believing our money is safe in the banks, that we are the strongest country in the world, that we will always be „on top” so to speak. So I feel a healthy dose of skepticism and self-reflection is good in this arena, and this movie was a way for me to explore these fears.

In my personal opinion, such extreme scenario in real world would be an own goal for China. I think their economic actions are sufficient enough to make Western world dependent on them sooner or later. I’d like to ask you about source of the idea of DRAGON DAY. Why did you chose this „form” of apocalypse for United States?

If the Cold War was about the fear of the Soviets beginning a nuclear war, I think the 2010’s will be the beginning of the fear of China or some other entity sabotaging us through cyber attacks plus conventional military means.

China, as many people know, is arguably becoming the new main center of economic power. However, China also has a very different political disposition— their human rights record, their pseudo-Communist form of government. They are a 5000 year old empire. Frankly, I know very little about China and have nothing against them— they just seemed like a very suitable and realistic „enemy” for the movie. Because here in the U.S., it’s an unspoken fear in the minds of everyone that they will „take over” us someday.
But there is also the issue of debt. China has loaned nearly $1 trillion dollars to the U.S. government. What happens if we can’t pay? They might feel a right to reclaim or repossess the country to get back what is due to them.

Obviously my movie reflects an extreme scenario– hopefully entirely fictional. In a more realistic scenario, the US government would probably just print more money and devalue the dollar to pay off this debt.

On the other hand, recent Wikileaks revealed that the Chinese government was indeed behind the hacking of Google that led them to exit the country. So we know that this form of attack is being pursued.

Do you want to say anything particular to the audience with DRAGON DAY? Does your movie have any specific message?

Yes. Ultimately this movie is not about doomsday, or about cyberattacks, or about China at all. It is about a family who has grown distant from each other, chasing an unsustainable lifestyle. When they lose everything, it forces them to ask the question about what truly do we need to make us happy. Towards the end of the film, they have escaped into a shantytown in Mexico. They are destitute, dirt-poor, but happier than they have ever been because of the richness of their relationships with each other and a new friend. 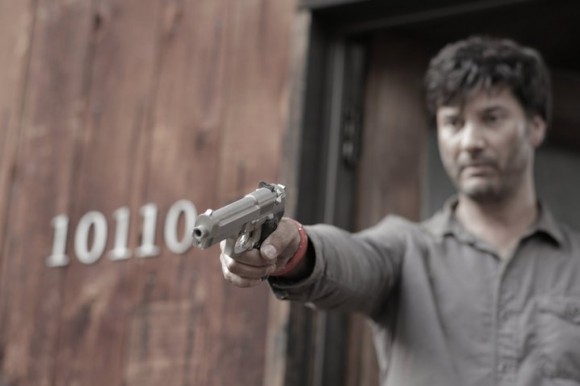 I know that you did an animation called FLATLAND. Haven’t seen it, but it seems very intriguing, original and… well, weird. Could you tell us something about that experience? Especially that it is something totally different from DRAGON DAY.

Sure. FLATLAND is a half-hour animated film based on the cult classic novel of the same name, written in 1882 by Edwin Abbott. It is about a world of only two dimensions, a world in which the Flatlanders don’t believe in the existence of this so-called „third dimension”. But when of the Flatlanders gets a visit from a mysterious stranger who comes from three-dimensional Spaceland, his view of reality is altered forever, and he is put on trial for heresy.

The story is deliciously „weird” as you put it, combining mathematics, philosophy, political satire and drama. We were fortunate to have the voices of Martin Sheen, Kristen Bell and Michael York to bring the characters to life.

The experience of making Flatland was fantastic. The DVD is used by many math teachers and is popular with science fiction fans and with anyone who has read the book. Currently there is a new version being developed as an IMAX 3-D film, targeted to be released next year. More info at http://flatlandthemovie.com

Was there any movie which really made an impression on you in 2010?

INCEPTION for its high concept, and THE SOCIAL NETWORK for is acute observation of human behavior.

Do you already have an idea for another feature?

Yes, too man ! <laughs> Currently I have a completed script called THE BEAUTIFUL LETDOWN, a modern-day Robin Hood tale about a man trying to save the world who can’t even same himself. It falls under the genre of magical realism, which I love. I hope it will be my next film. And I am working a futuristic script called THE BOOK OF NOAH, which has echoes of FAHRENHEIT 451 and BLADE RUNNER.

But first I will need to complete post-production on DRAGON DAY. We’ve just started editing the film.

Thank you for the interview!