Undead attack from France – an interview with Yannick Dahan, co-director of „La Horde”

We invite you to read an interview with Yannick Dahan, co-director of an upcoming French zombie flick called „La Horde”.

Is there any particular movie which was a kind of a turning point for you? Which made you think: „Hmm, I want to be a director, too!”?

Well, that’s a question people often ask and I always hesitate. When I was very young, my father took me several times to theaters and I have intense memories of „The Ten Commandments”, „Once Upon a Time in the West”, „Star Wars” or „Mad Max 2” (yeah, I was too young when I saw it). But later, I remember I said to myself: “I wanna do the same thing!!” when I saw „Conan the Barbarian” for the first time. It has absolutely everything I love in the movies: an epic tale, a badass character, an enormous number of bad guys with huge axes, the best soundtrack in the world and a savage feeling that no other film has ever succeeded to create. So, even if I’m a huge fan of the Coen brothers or Veroheven, or Guillermo del Toro and Peter Jackson, „Conan” is the one that talks to my heart.

The plot of „La Horde” reminds Carpenter’s „Assault on Precint 13” a bit. Was that movie an inspiration for you during writing the „La Horde” script?

Well, of course, but it was really unconscious for Benjamin and me. We wanted a simple survival structure in which we could have fun with the characters and try to say a few symbolic things about French society. And since in our youth we were really influenced by Carpenter, Friedkin, Raimi, Schwarzenegger, Hooper and others, it is clear that „La Horde” is filled with various influences. It is the first movie for us, you know, and like young directors always do, we wanted to put inside a lot of things we love. Maybe even too much for such a low budget. So „La Horde” is obviously generous in the sense that we wanted to put in it all that we loved when we were young. So it has, I think, a very „eighties” feeling. Badass guys with big guns shooting insanely howling zombies, crude dialogues, that was the point. That’s why we didn’t want young and beautiful actors like in every other action horror films. We wanted older, tough guys with a background on their faces :) So what we took from Carpenter, I guess, is the overall badass feeling of his films (which are incredible for us), and the fact that cops and gangsters make an alliance to survive. The rest of the film is very, very different.

There are plenty of new zombie movies lately. Almost every week we hear or read another news about some upcoming zombie movie. What elements will distinguish „La Horde” from the rest of the new zombie flicks?

Well, it’s true, but since it’s our first movie, you can easily imagine that we thought about it a long time ago, and it was very looooong before we could get the money. When the project started for us, only „Dawn of the Dead” had been released. So we didn’t make it to exploit any recent success. It’s just bad luck for us that so many people make zombie movies:). For example, „Rec 2” started shooting after us and will be released before. That’s just the way it is. But we know „The Horde” will be a different case… It’s not really a zombie movie. It’s a real action movie… with zombies. So it’s quite different. We don’t have a lot of gore, we don’t really want to create jump scares and we don’t focus much on the zombies. For us it’s overall a fun ride, very fast, with dark humour and bigger than life action scenes where tough guys facing the unimaginable, really get pissed off.

Honestly, I love different types of zombie movies. But definitely, my favorite one is „28 Weeks Later” by Fresnadillo. A tragic and existential atmosphere, brilliant directing, incredible action scenes. It has everything: fun, violence, intense storytelling, great characters and great symbolic themes about modern societies. After that, I’d say Romero’s „Day of the Dead”, cause it’s still the one that scares me the most :) And it has also a great symbolic story. And finally, like everyone else, Romero’s „Dawn of the Dead” cause it’s the real masterpiece.

I think today we can talk about a New Wave of Young French Horror Directors (Aja, Moreau & Palud, Gens, Laugier, Bustillo & Maury, now you and Benjamin Rocher). How the relationships between all of you look like? Do you support each other or is there a rivalry between all of you guys?

It is very, very difficult to make genre films in France and we are only a few who have succeded in getting the money to make some of those features. So of course we know each other. That being said, it’s only a question of human relationships. There is absolutely no rivalry between us cause we have all suffered a lot to make our movies and we all respect each other’s work. But also, we don’t necessary know each other personally. I’m a dear friend of Xavier Gens and I have very good relationships with Bustillo/Maury, David Morley or Abel Ferry. They all supported me and Benjamin when we were shooting „La Horde”. Xavier helped us a lot, both financially and artistically, and David made a cameo in the film. But, for example, I don’t know personally Pascal Laugier or Moreau/Palud. 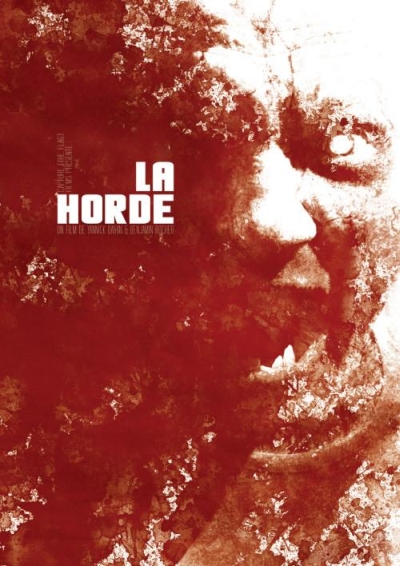 Some of the guys mentioned above already blazed a trail to Hollywood (Aja, Moreau & Palud). What about you? Would you like to make feature films there?

Well for us, it depends on the project. We’re not especially eager to be exploited in Hollywood. :) The thing is that it’s so hard to make genre films in France, so most of the young French directors go the States only to… work, you know. Not because they dream of it. For example, I know it’s gonna take a year or two before I can shoot another film in France. But we already have contacts in Hollywood – they want us to direct a feature film. So I cannot say I will resist for sure, even if  I’d like to make another French film first. But it takes so much time in my country to get things done…

And the last question – in your opinion, who would win in a „mortal combat” between Steven Seagal and Jean Claude Van Damme? :)

It’s a very interesting question!! And I have thought about it for a long time now. It’s difficult to answer, because Steven, my man, has become a real life Buddha and Van Damme wants to win an Oscar now :). So, I’d say, 20 years ago Steven would have crushed Van Damme in a split second cause he was a real martial arts master and he’s so funny with its oldschool badass “don’t fuck with me” attitude. But now, frankly, Van Damme is in better shape than Steven. It would be a horrible fight to watch I think, but Van Damme would win easily. Look at Steven movies man, he can’t even move!! :) (and I know, i watched them all, even the worst directed straight to DVD!!!)

All of them? Wow, and who’s the tough guy here?:) Thank you Yannick for this interesting and funny interview.