The Secrets of the Fourth Reich – an interview with Shaun Robert Smith, the director of „The 4th Reich”

We invite you to read an interview with Shaun Robert Smith, the director of „The 4th Reich” – upcoming war flick with horror elements. Or horror with war elements? Anyway, Shaun presents us his quite interesting project. Have a nice reading.

I know that „The 4th Reich” is kind of extended version of your short movie called „The Soldier”. Why have you decided to base your first feature film on the same idea as „The Soldier”? Did you feel that the potential of the story hasn’t been fully exploited?

Initially ‘The Soldier’ was to test the idea with audiences, The Soldier exceeded expectations gaining a UK theatrical release and an international DVD distribution deal. This sparked huge anticipation for the feature and I was asked to write the script by a very well known British producer. The Idea for ‘The 4th Reich’ originated from my ’98 student film ‘AWOL to Horror’ It was experimental but gave me a concept that has evolved over the years. AWOL was originally set during the Vietnam conflict and explored various conspiracy theories. ‘The Soldier’ was once described as ‘A dark bloody slap to the face’ we intend ‘The 4th Reich’ to be ‘A twisted gory wallop in the nuts’. 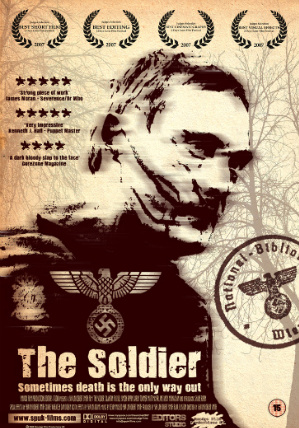 The base of your story is inhuman work of Dr Mengele and its horrible effects. But my question is – does it have any reflection in actual Mengele experiments or is it 100% fiction?

The scary thing is Hitler believed in the coming of a super-human race, most people think that was the blond haired blue eyes regime, but in actual fact Hitler was heavily into the occult, and commissioned Dr’s like Mengele to research re-animation. “Once dead you’re brought back to fight again”. The story of The 4th Reich is based on this research, a “what if” scenario.

What can we actually expect? Will „The 4th Reich” be more dark, atmospheric and oppresive movie or rather gory fun full of blood, guts etc. Or maybe something in between?

I genuinely intend to produce the first terrifying zombie movie, I would like to refrain from using the ‘z’ word as it cheapens the sub-genre. The film is primarily a war film, but the situation leads the characters to unspeakable horrors. The film is more an exploration of fear and the desperate depravity of mankind. The Nazis are more an allegory for all forms of control. A fear that cannot be drunk or ignored away as it is the potential for what is deemed the ‘evil’ in all of us, plus we are shooting in 3D which will add to the intensity. There is a little bit of everything for everyone – famous faces, gore, Nazi’s, explosions, tanks and a shit load of blood – and that’s all in the first 10 minutes.

I know that one of the characters will be played by Tom Savini. I won’t ask you how did you guys meet or how’s your cooperation started etc, because probably everyone ask about that. Instead I’d like to ask you about his character – on the photo I saw on official website, he looks both scary and grotesque. Could you tell me something about his role? Who really is Standartenfuhrer and what’s his part in whole story?

Tom is an idol of mine, I would be stupid not to ask Tom Savini to come aboard. Tom read the script and embraced the idea immediately, and is 100% behind the project. The Standartenfuhrer is based on a real guy – Oskar Dirlewanger, I won’t bore (or disgust) you with the details but Dirlewanger was a sick individual who was responsible for the 20th century’s most horrific war crimes. Tom will appear in a scene with Simon Bamford (Hellraiser 1 & 2) and another horror legend who I can’t name just yet, but Tom Savini playing a Nazi will certainly whet the appetites of even the most avid horror fans. 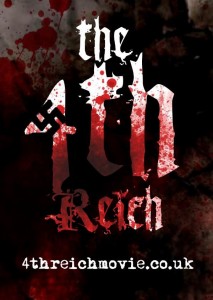 There were many horrors with nazi elements in the last years („The Bunker”, „Outpost”, „Dead Snow” to name a few). How do you think, what’s so attractive in mixing scary, supernatural stories with nazi symbolism?

Nazi culture is symbolic of pure evil and they are simple to expose as ‘the bad guys’ in films, they were responsible for some of the most unspeakable horror’s this world has ever seen. ‘The 4th Reich’ won’t exploit the Nazi’s, but use them as a sub-plot to drive the real horror, we will see the Nazi’s at their weakest, post D-day and on the run. The 4thReich is far more than the exploitative films you mention. The 4th is historically correct, we have top historians making sure we deliver authenticity from costume to timeline.

Don’t you think that for some people actual horror of WWII is enough and they could have something against such movies like yours? You know, someone could say „Goddamnit, Nazis killed my Grampa and now some guys are making fun of it!”?

Actually this film carry’s a serious point, of course some people will dislike this film, as with any film, we have our target audience, but we like to think we can lure fans of all genres. In ‘The 4th Reich’, The Nazi’s are really just a subplot, an interesting situation I have put the characters in. Most people will realize that we have stretched the truth a little. If we manage to convey the full horror of WW2 to new generations we will have done our little bit to ensure the sacrifices made are not forgotten.

What do you think about the movies I mentioned above? Do you have any favourite „war horror”?

I think I’d like to take you back to a film called ‘Zombie Lake’ that featured Nazi Zombies rising from a lake. I liked this one, a little sparse on the ‘ol gore but it planted a seed within my mind. As did the classics ‘The Beyond’, ‘Burial Ground’ and ‘Dawn of the Dead’ etc. I intend to bring back the visceral quality of these films, resurrect the 70/80’s style. I think the films you mentioned were all missing something, I liked them, but that’s as far as it goes. My two favorite genres are Horror and War, why not put the two together.

Do you have any future „post-4th Reich” plans? Do you already know if your another movie be horror again or a teenage comedy or melodrama for a change?

Absolutely. ‘The 4th Reich’ is a trilogy and always has been, producer Philip Morris and I intend to produce these over the next five years. But all three will be totally different from each other, exploring different issues. I want to write and direct other genre movies and I have a few plot outlines so only time will tell.