Two Towers in Waterworld – Interview with Christian Schleisiek. the director of „Babylon 2084” 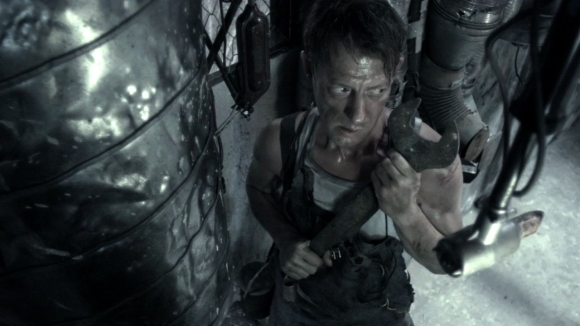 We invite you to read the interview with Christian Schleisiek, the director of German sci-fi short „Babylon 2084”.

Could you introduce yourself and your works to our readers?

Ok, let’s see.  I used to study media-design in Mainz, Germany and “Babylon 2084” is my diploma – as well as Björn Frielings (DOP) and Yvonne Alberts (set-design). The film is a 30min. Science-Fiction: In the year 2084 the world has sunken into the sea. Therest of mankind lives in two towers which underlie a self-destructing constraint to grow higher and higher. The story is about a worker in the one of the towers, who finds out about these problems and gets the chance to change them.

What’s the story behind ’Babylon 2084’? Could you tell us how the idea of the movie was born in your head?

Like most dystopic stories, our film magnifies certain aspects of our current world. It puts them in a reduced, abstract model. Basically, the film is about our economical and financial system which has to grow and expand constantly  destroying itself at the same time – and the reason, why people don’t change its unjust and suicidal structure. So the idea is pretty much inspired by reality.

What was your inspiration while creating the whole visual concept for the movie? Works of Jeunet and Caro? Terry Gilliam movies perhaps? Any others?

I’ve heard this comparison to Gilliam and Jeunet quite a few times now. I take it as a compliment, because I like their films quite a lot! They are known for films that are visually very strong and full of crazy ideas and have this weirdness to the worlds they’re set in that I really love!… But it’s not that we necessarily wanted to make a film “that looks like this and that” The visual concept is quite determined by the setting of the film: There are these two towers that are made of recycled material from the sea ground. That was a pretty cool frame to work with. It’s only logical that a lot of today’s machines and items become something else in that recycle- world. And since the film is set in this unreal world we could use all kinds of “unrealistic” means of expressions. During the shooting people started saying this film was going to be a “comic-film”. I liked that description. I really like comics.

Would you like to do a full length movie based on the same idea if your short will turn out to be a success?

Well  some modifications would be necessary  and we’d need a slightly bigger budget  But I think so, yeah. We’re not pushing any plans on that, though

Do you consider forms of distribution other than various festivals screenings? A DVD or online publication of ’Babylon 2084’?

So far  not really but we’ll see about that. If someone really wants to see the film, he or she should simply contact us via our website. 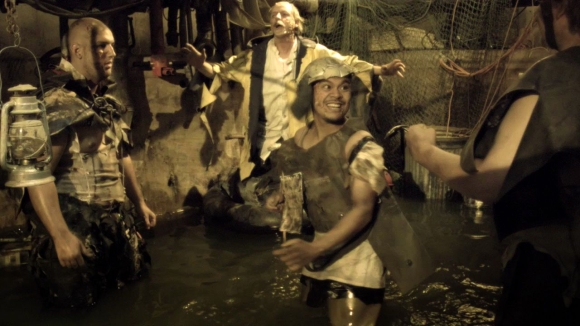 In your opinion where lies the future of sci-fi cinema? In animated movies or traditional, ’human actors’ features?

I asked myself the same question too, lately. Last time I was in the cinema, 9 out of 10 movie- trailers where animated. I like animated films – no doubt about that – but I was surprised. But for me these are two different kinds of films that both have their eligibility. I don’t think animations will kill live action Sci-Fi. If you really want the audience do believe that what they see is real  you better choose human actors. Imagine “Alien” with an animated Ripley. That’d be rather funny than scary.

Are there any other young German sci-fi/horror/thriller directors we should pay attention for in the nearest future?

Probably. But I don’t know any. Everybody loves genre films, but they’re not produced in Germany. (all right  let’s put a happy ending to it:) Not yet!

Thanks for the interview!