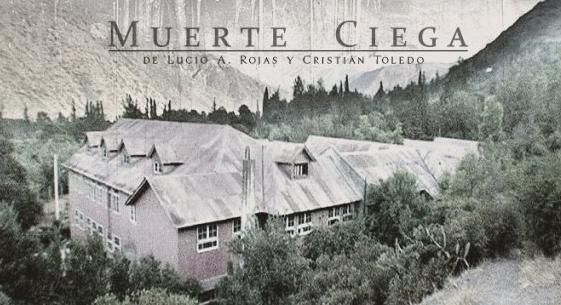 We invite you to read the interview with Cristian Toledo, the co-director of „Muerte Ciega” („Blind Death”). This is a low-budget zombie flick made in Chile by two film students, Cristian and Lucio Rojas. You can find the trailer here.

As far as I know, you guys are film school students. Is „Muerte Ciega” some kind of diploma work or something like that, or did you do it just for hobby, „after hours”?

No. We did it for love of the genre in parallel to our studies. Almost as a hobby, but also as an experiment. Many fellow film school students helped us in various areas in which they were interested (picture, sound, assists, etc.) And we used some equipment from the school to carry it out. But financing was totally independent, and made by Lucio and me. Each of us will have a feature film as a final work at school, with all the academic support but with limited budget, emphasizing the script, acting and narrative lines. These films will be filmed this year and the next, there may be some surprises for the genre with them.

Why „Blind Death” („Muerte Ciega”)? Does your movie refer in any way to Amando de Ossorio „Blind Dead” classics?

We knew the saga of Amando de Ossorio, but our zombies and the argument in general are not related, they just share the same name. Our zombies are blind and capture their victims through the Onate, attracted by the pheromones of fear that every animal produces.

I was a bit shocked when I saw how much money you had for production „Blind Death”.  What was the most difficult part of „Blind Death” production  (from financial point of view)?

The most difficult part (where we spent most of the money)  was the maintenance of crew during the filming (food, water, transport). By the way the crew and actors agreed to work for very low wages. In addition to rent some semi-professional equipment to friends.

We use so-called „guerrilla” filming techniques, this means that there was no electric lighting, all locations in their natural states, etc.

The whole process of postproduction was done at home with ordinary equipment and software that anyone can get (I cannot give names). This limits us to be able to deliver the film in DVD format only and have no quality standards for a film premiere (in addition to not having any money either), unless a film distributor buys the rights and has the resources to do something bigger like a international release.

Does your movie have any deeper message you’d like to share with the audience, or is it just pure violent, undead fun?

„Blind Death” shows a series of errors that can occur when large corporations and governments get involved with forces they do not understand (and are not interested in understanding, only want to get some profit). And people are always the victims of such conflicts.

This leads to major problems that will eventually turn on the characters: betrayal, ignorance, greed, anger and cruelty. This film is not a pretty picture of the human race.

On the other hand we want the experience to be as entertaining as possible [laughs].

Zombie (or „quasizombie”) movies is the most popular horror subgenre these days. Why did you chose this kind of horror for your debut? Aren’t you afraid that the audience can be a little tired and bored with all these living dead creatures?

We are aware of the many zombie movies that have come out lately (all after the success of „28 days later”), but we believe that the error of these mostly failed attempts is taking refuge more in the style and gore effects rather than in other film elements like script or narrative lines. They are and research in the pure visual form and the rest is in the background. With „Blind Death” we hope to catch other elements (beyond FX, and more stylish look that can be given to a zombie),  to take care of the characters, the survivors and the narrative, and get the fans enjoying.

Your movie is not the first Chilean attempt in zombie genre – you probably know Jorge Olguin’s „Solos”? How did you like it? Are there any other interesting Chilean horror movies you could recommend?

We know „Solos”. Jorge Olguin went to our film school to present the project before it has seen the public light.  We started planning „Blind Death” in the time before they premiered their movie. And there are big differences between our two films.

Horrors have been made in Chile, but they were always trying to catch patterns of production and writing from North America, leaving the film at a disadvantage to large productions, as they tried to emulate and not to separate from them. There was no question to create a unique style as it happened to the horror in other countries, like Japan. But now, here in Chile some very interesting things have been done, but they are still in production. Stay tuned for this part of the planet [laughs].

Which zombie movie is your favourite and why?

Without naming the great classics of Romero („Dawn of the Dead” and „Day of the Dead” are my favorites), good lessons on how to create oppressive atmospheres and get the most out of human failures to have heartbreaking stories, is the remake of „The Night…”  by Savini, but I’m still waiting for the version with all the shots cut and censored by the MPAA. Ah! and I cannot forget to mention the saga of Fulci. Great teacher and the FX are still enjoyable.

Personally I like „Return of the Living Dead,” „Re-Animator,” „Shaun of the Dead”, „Bad Taste” and „Braindead” – the movies in the humoristic tone (a bit less „Zombieland”). They know how to take the best of the genre to make us laugh without falling into ridicule or insult.

From the new, I have a guilty pleasure with the series „28” (Days, Weeks), personally I prefer the first one (by Danny Boyle). The video format and freshness that has the script and characters are very attractive. But I feel sorry for the many imitations that have come later.

Also, the games „Resident Evil” 1, 2 and 3 are for me a great trilogy of zombies and mutants with a very cinematic feeling. They manage to bring the classic horror genre at a very good point.

By the way, the music video „Thriller” has great moments and great significance to zombie culture, as everyone knows.

So what next? Do you have any future plans or ideas for another movie? Will you be working together again?

We have many projects under our arms, some taking place right now and others in the future. Personally I’m developing a history of action/crime/drama for film school. Lucio is developing a slasher film. We help each other. Together we plan to make in the future the „Blind Death” prequel, a story of action / horror / war involving zombies and some characters from the first movie. We hope to have a bigger budget this time h[laughs].